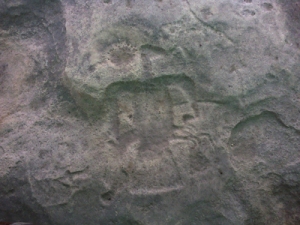 In an effort to get into better shape, Mike and I have started exercising. I have a really hard time staying motivated when I am staring at the blank wall in the basement while riding the bike or watching the same work out video for the umpteenth thousandth time. I decided it would be grand to view all the different places in our little slice of the world. Get out of the house, explore, get some sunshine and have some fun. I have a really hard time saying the word exercise, so calling it EXPLORING has worked really well for me. St. Louis and the metro area is really great in that it has hundreds of places go for a stroll, a walk or a hike!

While looking for a new place to explore, I stumbled upon Washington State Park in De Soto, Missouri. They have petroglyphs! Cool! I have been taking an archeology class and learning a lot about our local Native American populations. The petroglyphs are believed to date around 1000 AD.

The photo above shows the Thunderbird with the sun to the left of it’s head. The thunderbird was an often recurring theme in Native American tradition. 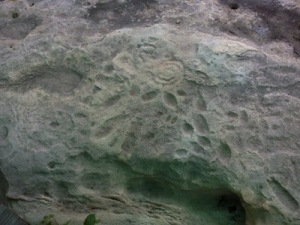 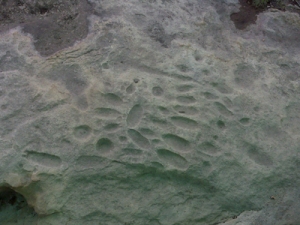 The images above show oval indentations in the rock. These carvings are believed to be eggs, a sign of fertility. The image on the left has a spiral in the top/center, thought to be a snake, also representative of fertility.

There are a lot more of these carvings throughout the park. It’s really neat. Walking along the paths, looking at the rocks, wondering ‘Who was this person that carved these stones?’, gave me a little better perspective on how ideas impact our culture, society and the land we live on.